Hope all’s well out there!  We have a new Vizy software release, version 0.1.100.  Among bug fixes, this release contains the second major release of the MotionScope application.  Sorry this took so dang long… Hofstadter’s law still has its grip on Vizy software development…

Among the new MotionScope features:

You can check out the latest documentation here.

Earlier this week, Hackaday posted a review of Vizy.  It being the first review (ever), we were a bit nervous…  But Vizy’s various talents, likeability, and general good looks carried the day.  Some excepts:

“I found it ridiculously simple to get up and running, and it was just as easy to make changes of my own, and start getting ideas…  I was running pre-installed examples written in Python within minutes, and editing that very same code in about 30 seconds more.  …  Vizy has a level of polish and set of features that I really hope to see more of in future products like this.”

On Tuesday April 4th at 2:30 Eastern, Tom’s Hardware is hosting Rich LeGrand on their Pi Cast webcast! Rich will be showing off Charmed Labs’ Vizy camera and its capabilities. Pi Cast is a regular webcast and focuses on the latest and greatest in the Raspberry Pi universe. Be sure to tune in!

Hope all’s well out there!  We saw an opportunity to cross off two things on our software to-do list before tackling more advanced MotionScope features.   The latest software release includes a new example that will help you keep tabs on your pet, and possibly feed him/her treats throughout the day remotely.  Check out Pet Companion:

Pet Companion also has a nice tutorial that will help you learn how to create new Vizy Applications.

Also included in this release is Web Sharing, which allows you to access your Vizy from anywhere on the Internet, even if your Vizy is behind a firewall or router, which is typically the case.  Web Sharing is perfect for an application like Pet Companion —  you know, so you can share the URL with your friends.  Now they too can say hello and give your little guy/gal treats.

Hope all’s well out there!  A new Vizy software release just landed, and contained within is the first version of MotionScope (yay!)

Read more about it here, give it a try, and then meet us over at the forum to tell us what you think!

Also contained within this release is improved mobile support.  Getting things to render perfectly on all screen sizes is nearly impossible, but this release includes several improvements that make things more visually appealing and easier to use on smaller screens.

Additionally, there are lots of behind-the-scenes improvements… Enjoy!

We’ve done it!  All Kickstarter rewards and pre-orders have left the facility and are on their way to you.  If you are backer number 300 to 450, you should have received an email confirmation and if you haven’t received your reward yet, you should soon.  If your backer number is greater than 450 or you purchased a pre-order, your Vizy is on its way to our fulfillment partners and will ship within the week.  Nice!

On the software development side of things, we’ve been focusing on the MotionScope application, and it’s close to its first release.  Check out the quickie demo video below. 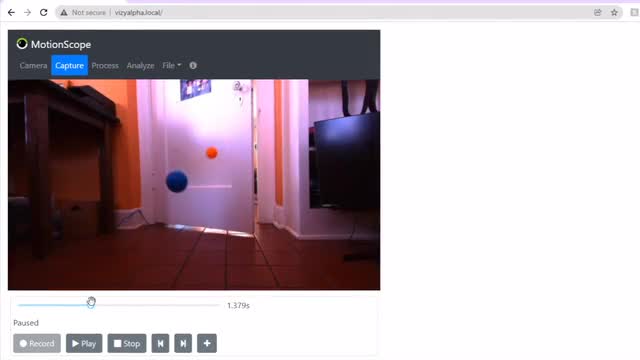 Additionally, we recently added some useful docs about how to implement a squirrel defense system and how to mount your outdoor enclosure if you plan on running the birdfeeder application.

Thanks for helping us through the last year — here’s to bigger and better things for 2022!

We have some good news!  We received the enclosures on Friday, so we wanted to give an update without any of the speculations we’ve seen in the last several updates.  So here goes, just the facts:

That last one has a degree of speculation, but we have plenty of experience manufacturing Vizys to make this claim.   We also have plenty of stock for retail sales and distribution after the KS rewards and pre-orders have shipped.  And we’ve learned some valuable lessons about manufacturing in this day and age…

Thank you so much for your patience!  Here’s hoping 2022 will be a better year for the supply chains, small OEMs such as ourselves, and for the technically-minded trend-setters and early-adopters such as yourselves.

Have you ever noticed that the progress bar for whatever you’re trying to get done on your computer often gets stuck at 99%?  It just sits there and taunts you with its almost done-ness, as if it’s daring you to throw something at the screen.  In my experience a few choice swear words are usually sufficient…  There should a word for this phenomenon because it happens all the friggin time…  we’ll call it Tantalizingly Almost, but Annoyingly Not Done, Yet, which makes the fun acronym TAANDY, rhymes with “dandy”, perhaps ironically so.

As you know, we’re waiting for Vizy’s plastic enclosures.   They have made the long journey across the Pacific, through the Panama Canal and have landed in Houston, where they now sit in a container freight station (CFS) warehouse, waiting to be processed and eventually shipped to us here in Austin.  Normally, imported goods spend no more than 48 hours in a CFS, but these are weird times, and it seems that these days, TAANDY begets more TAANDY as the delays make their way through the supply chain.  We’ve been told that once the shipment is released, we’ll likely receive them within 24 hours and that they could be released any day now, or it could take up to 2 weeks.

We’ll continue to push the freight forwarders and keep you informed… but right now we’re estimating that production will resume on December 17.

In the meantime, please join us in swearing at the screen.  The progress bar will reach 100%… thank you so much for your patience.

Hope all’s well out there.  Ever hear of Hofstadter’s Law?  It predicts that your next project will take longer than expected, even after taking into account Hofstadter’s law.  Hofstadter was clearly onto something, but his self-referential law doesn’t get nearly enough attention, especially in the realm of software development, because let’s face it — software is the worst!  So feel free to credit him when your next software project is late.  (Or super late…)

In the spirit of H’s Law, the 2nd release of the Birdfeeder application is finally ready.  We added recording capability to the Birdfeeder application.  You can now take videos, which will be uploaded to Google Photos, and if you like, Vizy will automatically take videos when it defends your birdfeeder.  You know, so you can make sure that the food that you’ve so generously provided makes it to the intended recipients.

Go ahead and update.   Full documentation will land later this week, but the new controls/features are fairly self-explanatory.  Nerdy note:  while Vizy is recording video within the Birdfeeder application, it’s also encoding a video stream for your browser to display, encoding the recorded video stream at full framerate/1080p, and running a Tensorflow network!

If you have any questions/issues, meet us over at the forum.

The Zim Alabama is docked in Yantian Harbor, Shenzhen.  There’s a Starbucks less than a mile away from the dock.  I’m picturing the captain walking down the gangplank thing, strolling over to Starbucks and ordering a Venti Soy Latte (with or without foam, I’m not sure.) He gets a 20% discount because of his maritime attire (he’s wearing his captain’s hat of course.)  He then sits and enjoys his tasty beverage while our enclosures are loaded on his boat…

Confirmation that the enclosures are onboard and headed to the US should come next week.

It’s been a quiet week, just the hushed sounds of software development.  If you haven’t done so already, go ahead and update your Vizy software and check out the Birdfeeder application.  The docs were posted on Monday.  We’ll be releasing another update next week with some bug fixes and video recording functionality added.  Have a fantastic week!

No products in the cart.

All Vizy products are now available, most orders ship within 24 hours. Dismiss